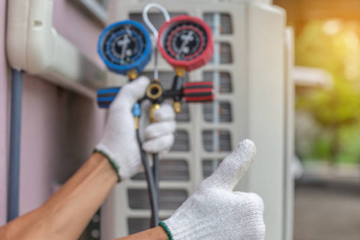 Why is Freon used in air conditioners

Air conditioners transform stuffy, humid, and hot air into a refreshingly cool relief for the summer heat. Of course, the new AC unit couldn’t do this without a little help from its best friend – refrigerant. To get a better idea of the relationship between your unit and refrigerant, think of your HVAC as a soldier and the refrigerant that goes in it as the soldier’s blood. What is refrigerant and how does it work? Let’s explore.

What Types Of Freon Are Used In HVAC Units?

Refrigerants, including Freon, are types of coolants that allow HVAC systems to produce cooled air. You’ve likely heard your HVAC system’s coolant referred to as Freon. But, you should know that there are actually several types of refrigerants for air conditioning units. Some are innovative and some are outdated relics.

The most widely used refrigerants in HVAC units are called R-410A and R-22. Industry experts often refer to R-22 as true Freon because it’s the last remaining survivor of the original Freon lines developed and manufactured by DuPont.

While R-22 does its job near perfectly in the cooling department, it’s not so kind to the ozone. It’s dangerous risk to the ozone is why the true Freons are all but extinct now. As chlorofluorocarbons have been reigned in under tighter and tighter control and higher and higher prices, true freons have slowly been phased out for more efficient refrigeration options. In fact, manufacturers quit making air conditioning units based on R-22 back in 2010. After 2020, R-22 itself will no longer even be on the market for those still using R-22-based models.

This transition away from R-22 has brought R-410A front and center. Developed in 1991 by the company now known as Honeywell, R-22 was released in 1996 as a more efficient alternative to R-22. It achieves this efficiency by allowing greater compression, which subsequently means that air conditioner systems operating with it use less energy.

How Does The Refrigeration Cycle Work?

Whatever type of refrigerant is used will be continually pumped through your HVAC system. The compressor within your outside unit is responsible for this pumping action. It takes the refrigerant and compresses and expands it repeatedly until it reaches a hot vapor state. From there, it’s passed to the condenser for cooling and condensing until it’s a gas state.

The remaining heat is then released as the pressurized refrigerant slowly moves through an expansion valve. It can now expand back into a gaseous state. As it becomes cooled, it’s moved along to the furnace or air handler’s evaporator coil. Here, a thin tube housing the refrigerant gets blasted with warm air, which transitions the warm air into the nice cold air that’s blown into your home.

The refrigerant can only take so much heat from the air, however. It will eventually expand back into a gas and be ushered back to the compressor. The cycle continues to repeat itself.

Every element of your air conditioning system handles refrigerant, a process much akin to blood circulating a human body. Without refrigerant, your HVAC system couldn’t produce cold air. The same is true of your freezer, refrigerator, automotive AC, and other cooling devices. They all rely upon the refrigerant’s efficient power to expand and contract under temperature and pressure to remove heat from the air.

Now that you know how refrigerants work and what types of refrigerants are used, it will likely be much easier for you to focus on keeping your HVAC system in tip-top working order. For example, you’ll want to keep vegetation trimmed back so that it doesn’t grow too close to your outside unit and impede air circulation.

Simple and routine maintenance by an HVAC professional, such as changing air filters, cleaning the outside unit, replacing air filters regularly, and replacing worn parts, will help keep your air conditioning in good working order and operating as efficiently as possible all summer long.